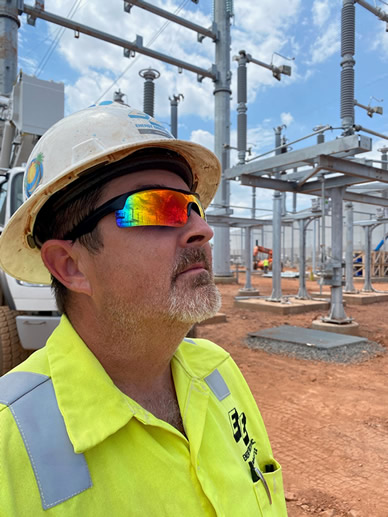 ‘I’ve not met a single person who wasn’t straightforward, honest and respectful to me’

Chris Presnell has worked for Energy Erectors for more than 16 years. He’s held many roles, rising through the ranks to become a superintendent.

As a superintendent, you’ll find him organizing projects with upper management, as well as overseeing his “build teams.” He ensures they have the equipment they need, and that they’re following safety guidelines, among other duties.

Working for a company like Energy Erectors was a desire Presnell discovered early on in life. Relatives of his best friend from school worked for Energy Erectors’ parent company, MasTec. He was drawn to their lifestyle, which included working with the latest technology and travelling often.

“I thought that might be a pretty neat job, traveling. I’ve always had a bit of a traveling spirit,” said Presnell.

He first joined Energy Erectors at 17 years old. He left for a time to serve a stint in the U.S. Navy, before rejoining the company. Part of what drew Presnell to Energy Erectors was the stability of the work, knowing that electrical infrastructure will always need to be built and maintained.

“As a young man, I thought there’s always going to be work, whether it’s a new build or revamping old systems,” recalled Presnell. “They’ve always been good to me. I’ve never not had work.”

Presnell also enjoys the satisfaction that comes from working as a team and creating a new substation from the ground up.

“As stressful as it can be sometimes, starting from a green field and six months later looking back and saying ‘We built something from nothing,’ it’s exhilarating,” said Presnell.

He appreciates the frequency with which he travels the country for work, too, even being able to transfer to a job site across the country if he chooses. Most of all, Presnell likes the team he works with, and appreciates how management makes his job easier.

“Upper management … I’ve not met a single person who wasn’t straightforward, honest and respectful to me,” said Presnell.